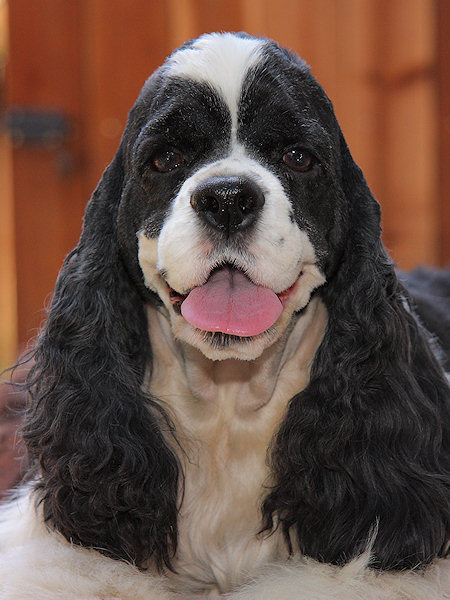 Pipa is a playful and merry little girl that joined our family in January of 2007.  And I do mean little...  at two years old she weighed in at only 18 pounds and after we switched to a different brand of dog food she got up to all of 20 pounds!  If Pipa had a motto, I'm sure it would be "let's play!"  She spends all of her time having fun and looking for new fun things to do.  She loves any toy that squeaks, but it's not a requirement...  she'll play with just about anything!  She's very fast...  in fact, in a flat-out dash chasing a tennis ball from one end of our yard to another, she can beat every one of our other dogs, even Dodger...  who is much bigger and more muscular !

When Pipa was a puppy, we used a great technique for tiring her out:  all we have to do was get the laser pointer out.  She chased it around at high speed, had a great time doing it, and it was a great way to quickly give her some exercise!  As she got older and wiser, she gradually lost interest in chasing the "red thing she could never catch"!

One of the amazing things about Pipa is her solid gold pedigree.  Both of her parents are champion show dogs, and 3 of her grandparents are, too.

Her father's registered name is Champion My-Ida-Ho N'Jems GrahamKracker, and his owners just call him Graham.  That's Graham in the picture on the left.  Take a look at the 2006 standings here and look at how many more points Graham won than the other parti colored Cocker show dogs.  I've never met him, but he must be an amazing dog to be that successful in the show world!

You can learn more about Pipa's dad over at his breeder's web site. 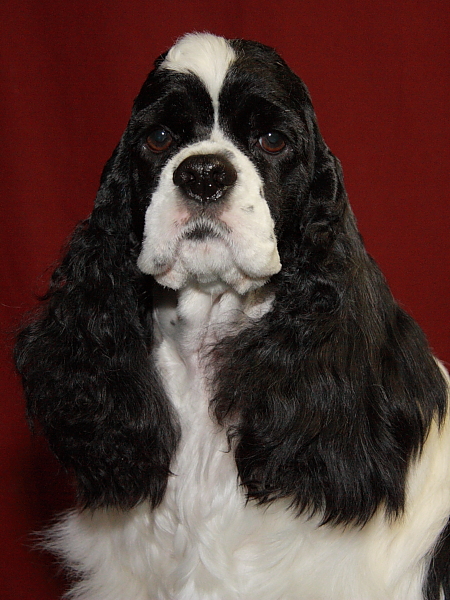 Her original owner called her "Honey Graham"...  but we didn't think that suited a black & white dog.  It seemed to us like Honey Graham should have been a name for a buff Cocker.  So we changed her name to Pipa on the day she joined our family.  Her AKC registered name is "Zim's Positively Perky", a reference to her merry personality!

I'll tell you right now that we didn't base her name on the Chinese stringed instrument called the Pipa.  We got the name from two of our favorite televisions personalities...   Regis Philbin and the very perky Kelly Ripa.  (We love their TV talk show, and I've been a Regis fan for about 30 years!)  "Pipa" is the nickname that Regis uses for Kelly.  We've always thought it was cute, and have been talking for a long time about using it as a puppy name.  It just seemed to fit this happy little girl.

I don't know how Kelly Ripa would feel if she knew we named a dog after her.  How would you feel if it happened to you?  Due to the risk that she might somehow be insulted, I think we'll just keep it our little secret!

Next time you're home on a weekday at 9 AM, check out Regis and Kelly's show...  and see how many times during the hour Reege calls her Pipa! 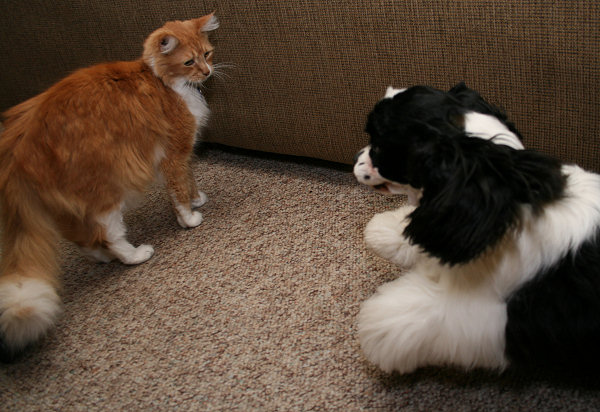 I mentioned that our little Pipa is very playful, and it just so happens that we have a playful cat, too!

In the picture on the left, it may look from Mo's (the cat's) body language like he wasn't having any fun...  but that was all just posturing.  These two each seek the other out and try to get a little fun going.  It's hilarious to watch, and I will really should try to catch it on video sometime.

Finding cats and Cockers that get along can be a little difficult.  My theory is that it takes a cat who is very secure in himself.  A cat that is easily spooked will run away at the first sign of an approaching Cocker...  and if the cat runs, the dog will chase it.  Once this happens, you can pretty much forget about the two of them getting along.  But if the cat has the confidence to stand his ground when a Cocker approaches, and to fend off the dog with a little defensive body language, the two will usually learn to get along just fine.  At least, that's been my experience.  It also helps if the dog has a gentle personality, like Pipa does. 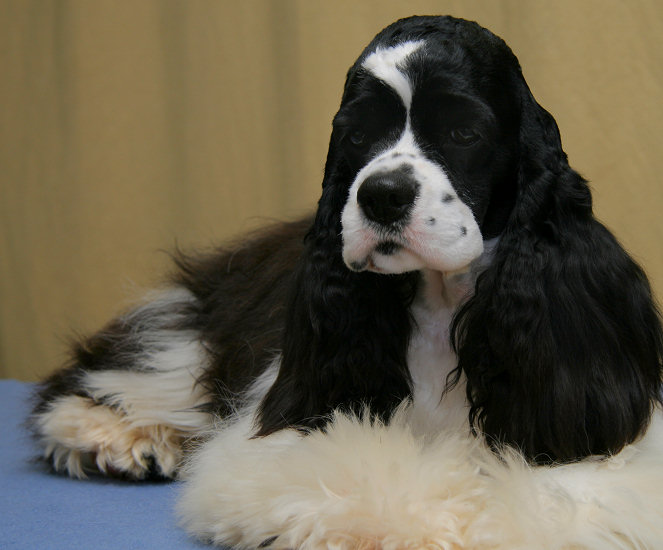 As you can see from the pictures, Pipa is a beautiful black & white parti colored Cocker.  She's got great markings, and a very nice coat.  She reminds us so much of our girl, Abby, who is the mother of our dogs Dodger and Morgan.  Pipa and Abby look a lot alike, and they both have that merry and playful personality.

The similarities between Pipa and Abby don't end with looks and personality, though.  They both came to us in a nearly identical manner, about six years apart.  In both cases, the original owner was unable to care for the dog and sought us out after reading about us on our web site.  In both cases, we were skeptical about a dog that somebody wanted to give up...  but were won over as soon as we met the dog and heard her story.

Our original plan was to use Pipa in our breeding program beginning sometime in 2008 or 2009...  but that plan changed after hip x-rays revealed an unusual curvature to her tibia.  Her father has some orthopedic problems, too...  so when Pipa's less-than-perfect tibia was revealed in an x-ray, we became very concerned that she might not be right for our breeding program.  Pipa did pass an OFA hip test, but we made a very conservative decision to spay Pipa instead of breeding her...  rather than risk any hip or patella problems in future Zim puppies.

Pipa is now living in Michigan with our friends Karen & Krash. 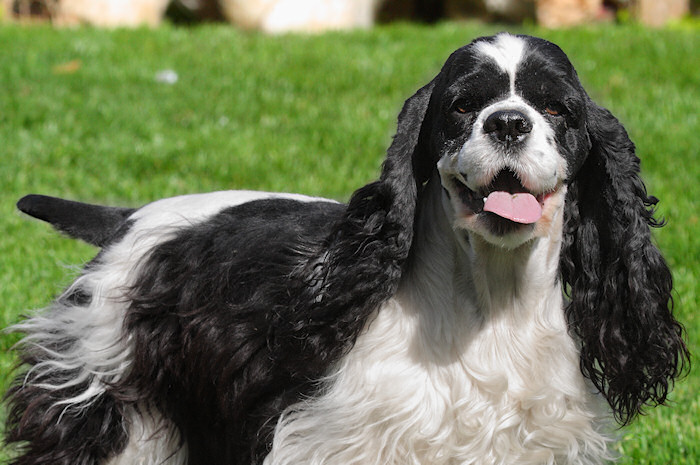 Pipa waiting for me to throw a tennis ball 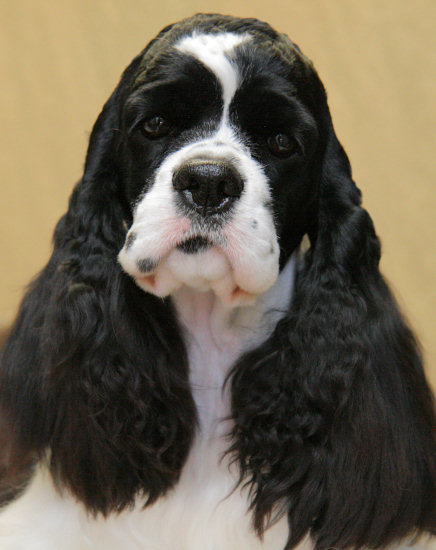 Pipa posing for me in my "photo studio"
(that would be our garage, with a blanket hanging on the wall!)
March 2007 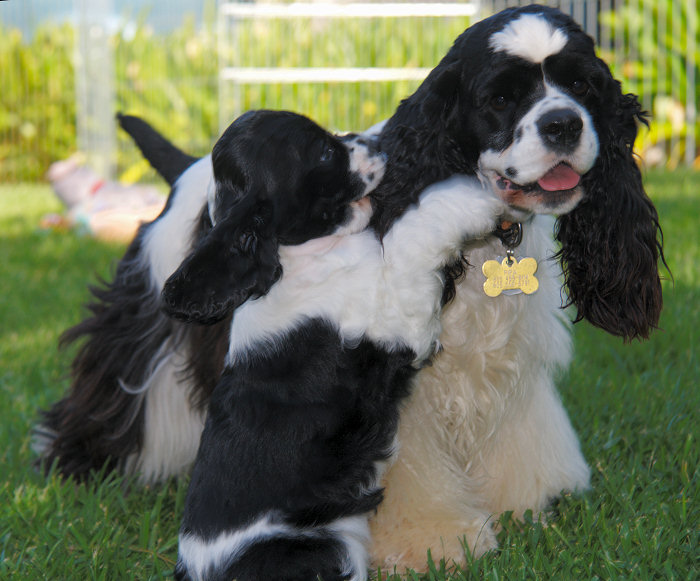 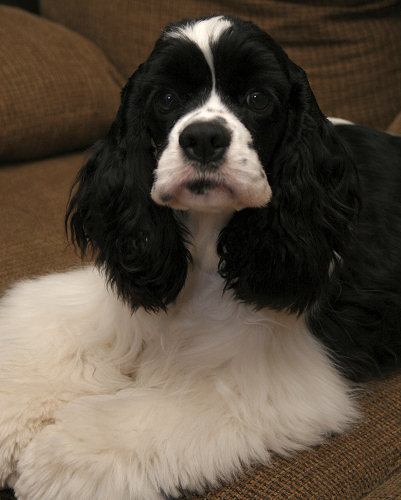 A photo taken just a day or two after she joined our family.

One of her favorite toys...  a squeaky tennis ball.
Thanks to Randi Kay & Corin for introducing us to these!