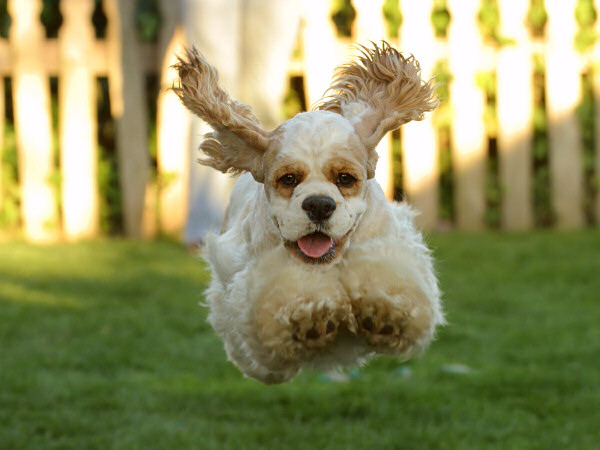 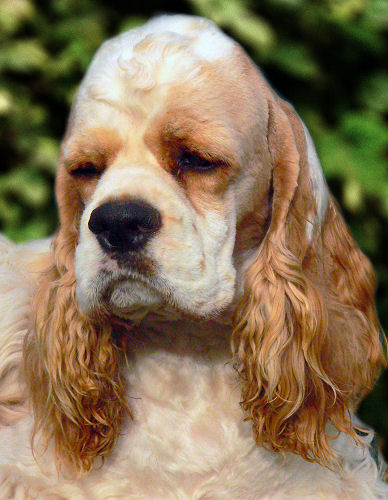 Dodger was born in our Puppy Palace on November 1st of 2004.  He's the son of our black & white girl, Abby.  Kellyn and I were right there watching when Dodger made his big entrance in to the world!

Dodger has a very interesting life.  Most of the time, his main interest is in chasing tennis balls.  He just loves to play ball, and will do it for about as long as your arm will last.  A couple of times a year, Dodger has a much more important job, though:  super stud!  He's fathered two litters, so far...  a total of nine puppies...  and it looks like he will probably be our one and only stud dog well in to the next decade.  With a lot of girlfriends in this dog's future, we think he'll have a pretty enjoyable life at our house!

Dodger turned two years old in November of 2006, and that's the magic age at which good breeders do health testing to make sure that their dog is ready for breeding and is not carrying genetic health problems that could be passed along to puppies.  Dodger passed hip and eye exams, and got the green light to begin breeding.  His first chance was with our girl, Reese, and she delivered Dodger's first litter of puppies in February of 2007.  That litter turned out well, so we gave Dodger another chance later in the year...  with our girl, Joanna.  You can see pictures of Joanna and Dodger's puppies here.

Since Dodger has fathered two nice litters of puppies so far, a common question that we get is "do you offer Dodger at stud?"  The answer is yes, with several conditions.  The most obvious condition is that you have to live close enough to San Luis Obispo county, California, to be able to get your dog here when she is in the fertile portion of her heat cycle.  Because we don't want to make a litter of puppies that will grow up to have health problems, we also require that your dog complete the same health tests that all of our dogs go through...  O.F.F.A. and C.E.R.F. testing, plus a brucellosis test.  Your dog also has to be a parti colored American Cocker Spaniel.  We are not interested in breeding Dodger to solid color Cockers (because the result would be mismarked puppies) or to dogs of other breeds.

Dodger's mom, Abby, is one of the most ball-crazy Cockers we've ever known...  and Dodger showed similar tendencies from an early age.  The phrase that keeps going through my mind is "the apple doesn't fall far from the tree".

Compare a few pictures of Dodger and his mom: 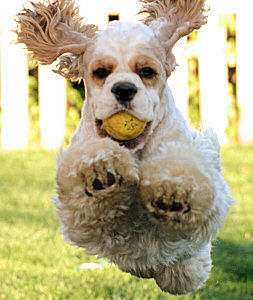 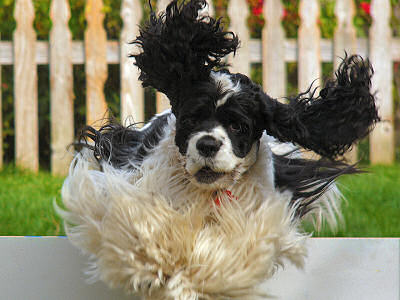 They were both jumping over the same barrier in these two pictures, but Dodger sure cleared it by a larger distance! 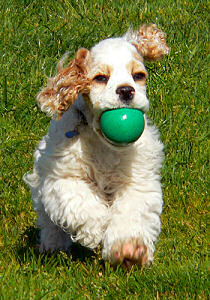 Dodger was 12 weeks old in this picture...  already very enthusiastic about retrieving balls. 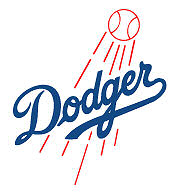 If you've read a little bit on our web site about Kellyn...  also known as Mrs. Zim...  you probably figured out long ago where Dodger's name came from.  Kellyn is a huge fan of the Los Angeles Dodgers baseball team. 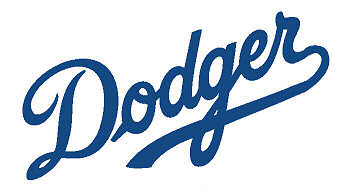 If you've ever been to Dodger stadium to see a game, you probably know that the hot dogs they sell there are called Dodger Dogs.  So it made sense to us that we should name our new puppy Dodger Dog.  Just don't ever try to put any mustard, catsup, or pickle relish on our boy!  His AKC registered name is Zim's LA Dodger Dog.

You know how any plane that the President of the United States flies on is called "Air Force One"?  Well, we refer to any place that Dodger sleeps in as the Dodger Dugout!

Our other funny line is that any time you play ball with Dodger, it's a game of Dodge-ball.

By the way...  about the Dodger logos you see here...  true fans of the baseball team will notice something's not quite right.  The team name is Dodgers, not Dodger.  The dog's name doesn't end in "s" but the team's name does.  With a little digital editing, I was able to remove the "s" from the team logo, and give our little Dodger dog a couple of logos of his own! 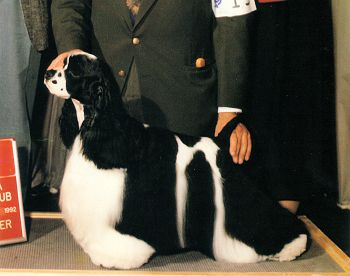 Another reason we liked the idea of naming our new puppy Dodger is because of a very famous Cocker Spaniel in the show world.  If you know a lot about Cockers, you've probably heard of Champion Empire's Brooklyn Dodger.  That's his picture over on the left.

Among his many accomplishments during his show career was being named Winner's Dog at the 1991 American Spaniel Club national show.  In fact, he was one of the top winners and one of the top producers (studs) in the history of the breed.  He sired a LOT of puppies...   one of whom went on to father a puppy named Absolutely Ready To Run...  also known around our house as Abby, the mother of our little Dodger dog.

That's right...  Dodger, our new puppy, is the great-grandson of Champion Empire's Brooklyn Dodger.  How's that for perfect?!? 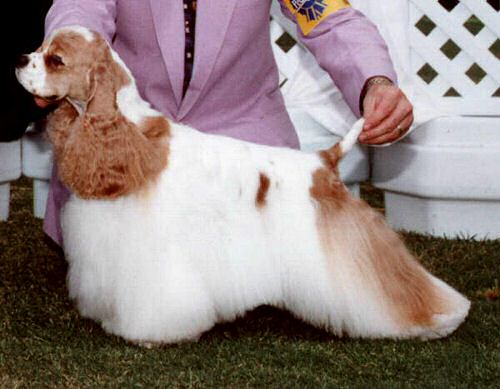 Now let me introduce you to the father of our little Dodger dog.  One look at him, and you can see that as far as coat color is concerned, Dodger takes after dear old dad!

Dodger's father is a champion show dog in Ontario, California.  His registered name is Champion Silver Star's Red Hot Lover...  what a great name for a stud dog!...  and his call name is Tommy.  That's Tommy's picture on the right.

Tommy belongs to Bea & Hap Jones of Jo-Bea Kennels, very successful Southern California show breeders with over 20 years of experience with Cocker Spaniels.  When we consulted with our friends in the Cocker community about who they would recommend we use as a stud dog for Abby, several people that we admire recommended Tommy.  We contacted Bea and Hap...  and even though we hadn't met them before and we have no experience in the show ring, they were not only willing to help us out but they were as nice as can be!  Truly a class act...  thank you, Bea and Hap! 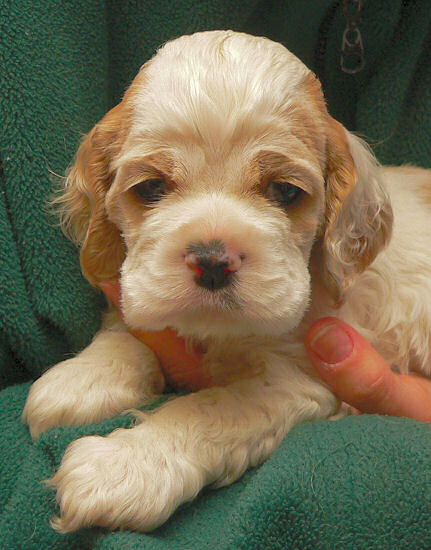 I took a LOT of pictures of Dodger and his siblings during the 8 weeks they were here with us!  Click here to see some of my favorites out of the hundreds of pictures I took.

A photographer friend of mine, Carol Patterson, took some great pictures of Dodger and his siblings, too.  Carol visited when the puppies were seven weeks old, and set up a mini-photo studio in my garage.  Click here to see some of the wonderful pictures that Carol took with her Canon digital SLR camera.

Check out Dodger's pedigree and find out about some of the champion show dogs behind our little Dodger dog.  He's got some impressive relatives!

In the pictures below, you can see Dodger growing up right before your eyes!  The pictures are in chronological order, with the earliest ones at the bottom. 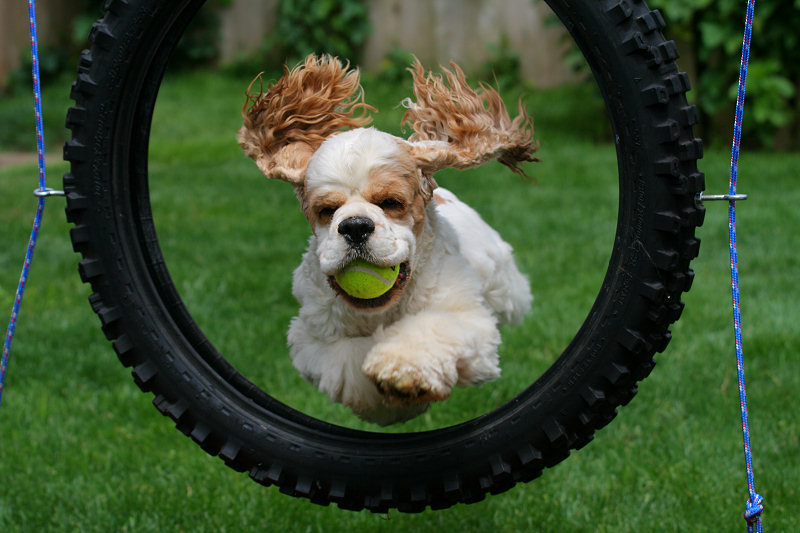 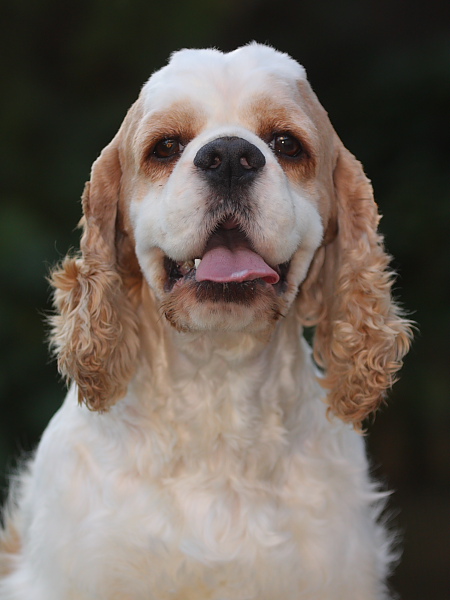 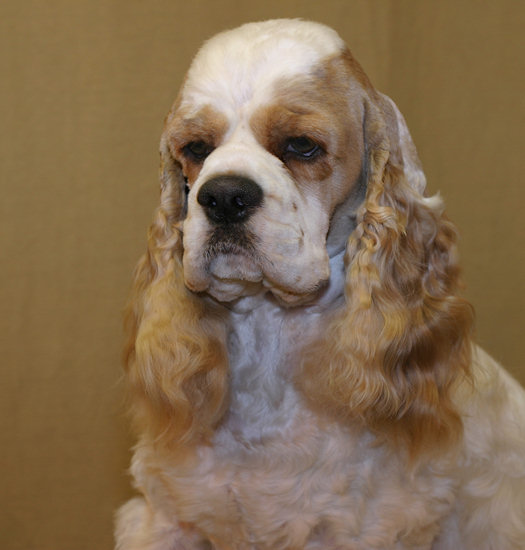 At nine months old he was basically fully grown 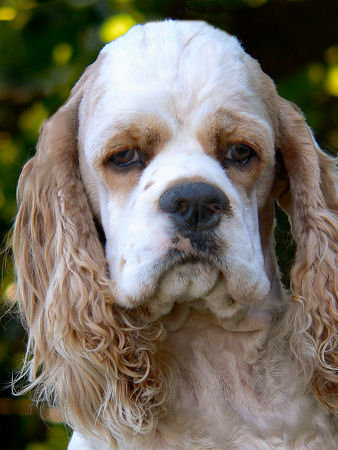 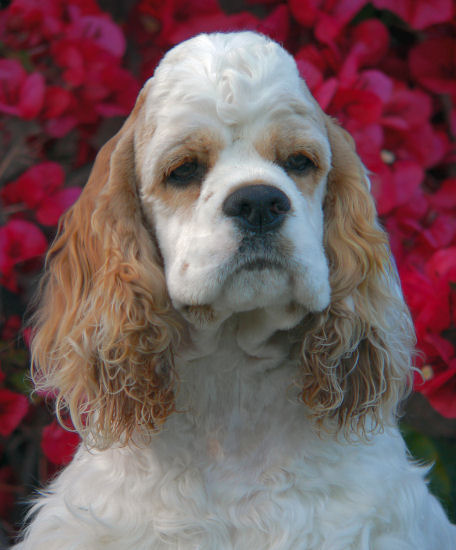 An April 2005 photo of Dodger, at five months of age.
At this age, he was starting to look a lot more grown up! 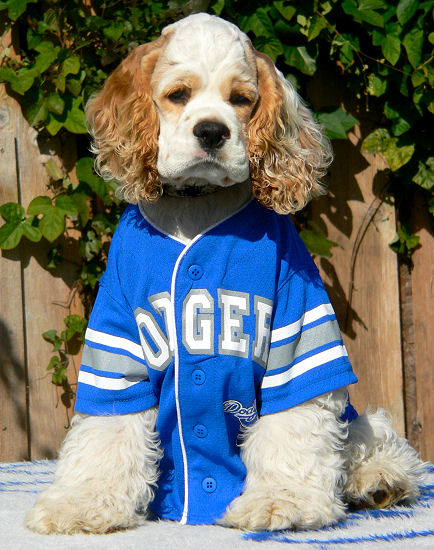 Dodger at 4 months old, in a  LA Dodgers uniform 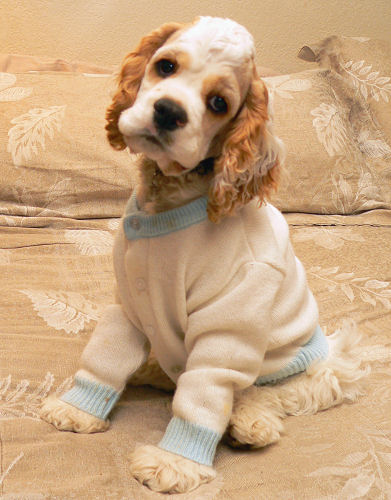 Dodger tries on a sweater, at 15 weeks of age 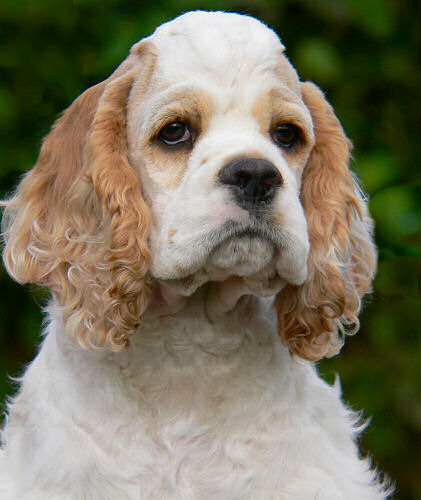 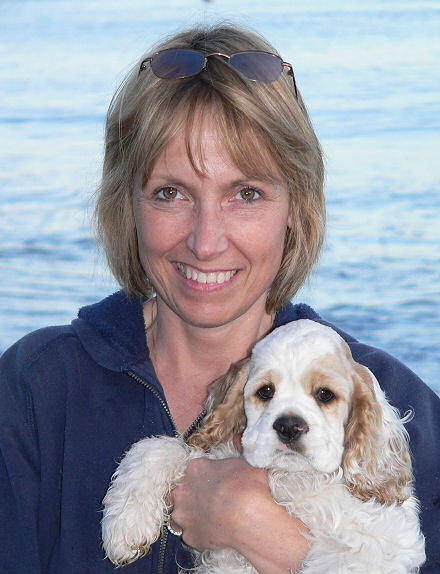 Dodger at three months of age, with Kellyn 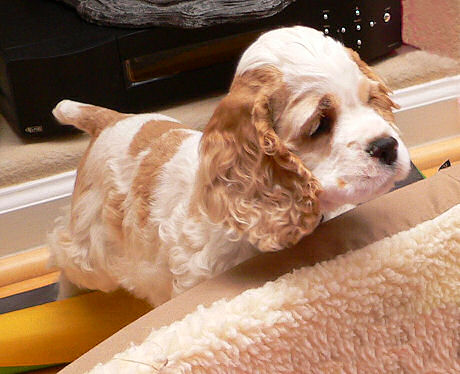 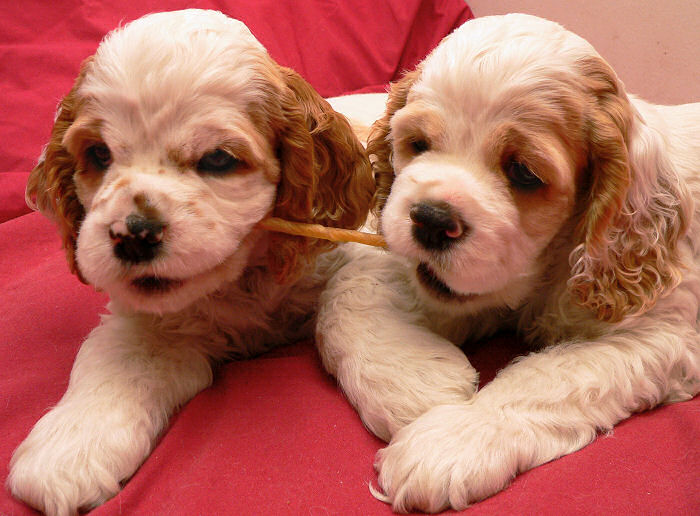 Dodger (right) and his brother, Riley, at eight weeks old.
Click here to see a funny video of them stealing the chew stick from each other! 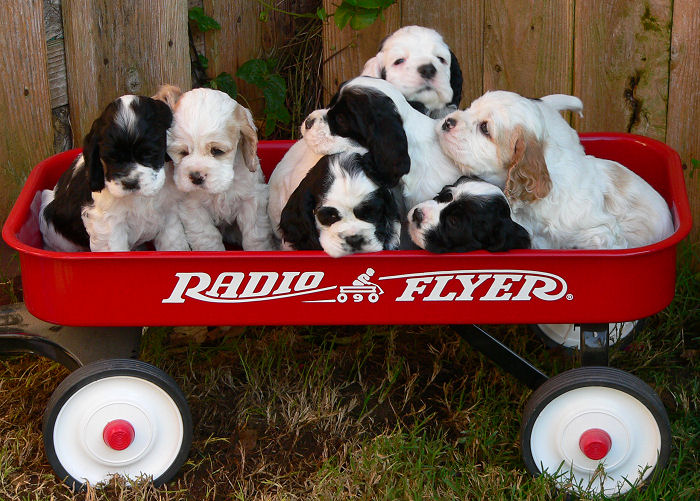 Dodger and his siblings at six weeks old 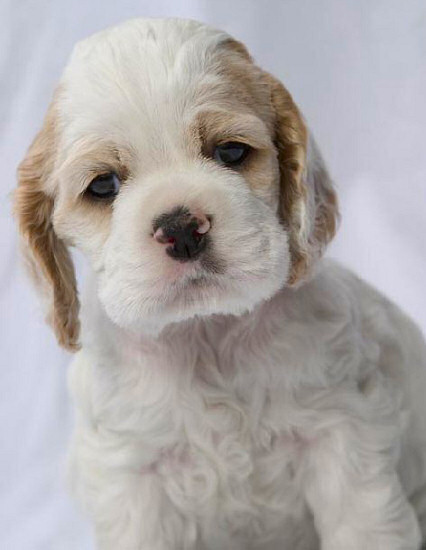 He looks like a little angel in this picture!
Carol Patterson took this photo...
see more of her photos here 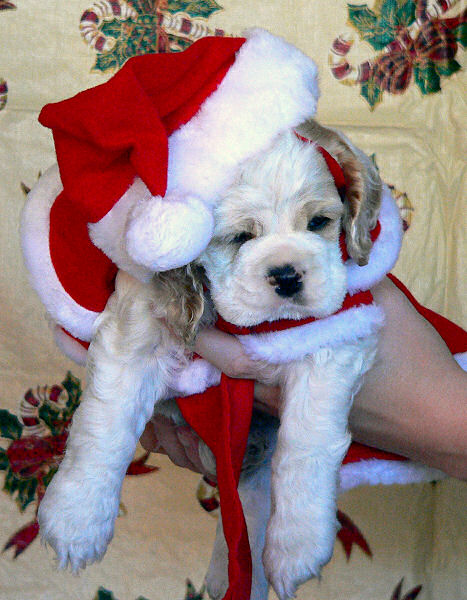 Dodger showing a lot of Christmas spirit...  all dressed up in a Santa outfit! 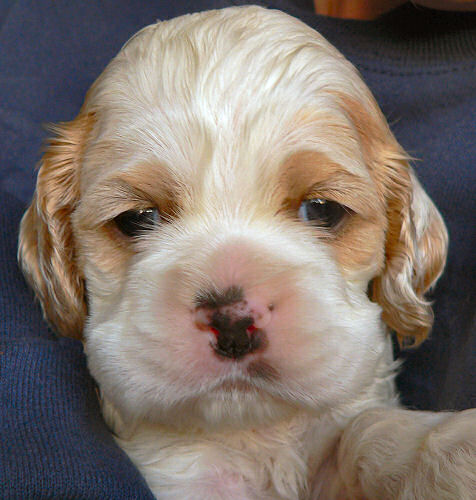 Here's Dodger at four weeks old.
The pigment in his nose had not completely come in yet. 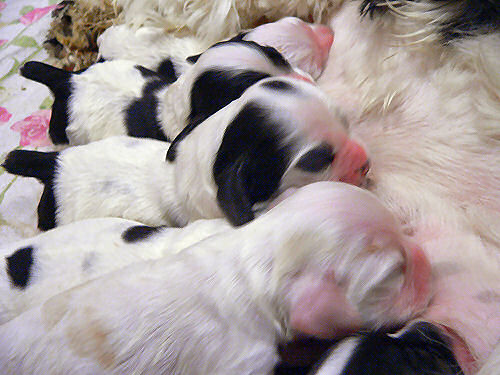 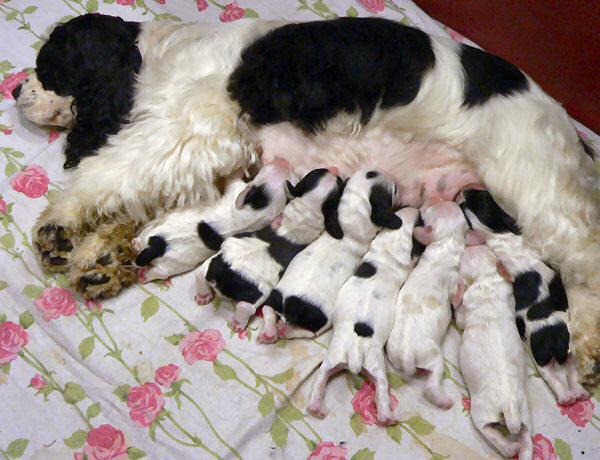 Dodger and his siblings at six days old.
Dodger is the third pup from the right.