Here is my advice on how to buy a good Cocker Spaniel puppy.
Please keep in mind these tips are written for people
looking to buy a pet, not a show dog. 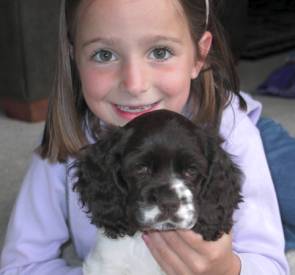 Now I'd like to share a couple of questions (and my answers) from people who had some concerns about getting a Cocker puppy...

Hi, I just visited your site and I was wondering if you could answer a couple of questions for me concerning cockers.   I had a wonderful, sweet cocker as a child and I was thinking of getting another one for my girls (ages 6 & 2).   Unfortunately, the one cocker that I know of now is not of the best nature.   Is this the exception to the rule?  Can I count on good blood lines to affect a puppy's temperament?   Or, is it mostly in just how the puppy is reared?

There are a lot of Cockers out there with bad temperaments.  You do have to be really careful where you get one from.  There are several factors which can affect the temperament:

Genetics.  For example, if there's been in-breeding in the dog's ancestors, or if there are just a lot of poor quality, unhealthy dogs in the dog's background.  Your best bet to protect yourself is to avoid dogs that come from pet stores, as they mostly come out of puppy mills...  and to avoid dogs with no pedigrees or with pedigrees that do not have any champion show dogs in them at all.  Another great way to protect yourself is to only buy a puppy after you've spent time with BOTH parents of the dog.  If you like the temperament of both parents, there's a good chance you will like the way the puppy turns out.  Don't just see pictures of the parents, don't just look at them through a fence at the breeder's house...  sit down and play with them for an extended time.  If you find yourself thinking about buying a puppy from a source where this is not possible...  this should be a major red flag indicating that you are taking a big risk by buying from the wrong kind of place.

The second factor is how the dog was socialized by the breeder.  If the puppies spent the first 8 weeks of their lives in a cage with minimal human contact, you're asking for trouble.  This is exactly what happens to puppies from puppy mills (which is where almost all pet store dogs come from) and from high volume breeders.  If you're buying from a source that almost always has puppies for sale, this should be a red flag.  They have puppies so often, that it's just a business for them.  They are probably not spending a whole lot of time socializing the puppies...  they're cranking out puppies in such volume that they just worry about the basics such as feeding, cleaning, and marketing the dogs.  You'd be much better off to get a puppy from a breeder that only has a few litters a year, and raises the dogs in a family environment where each puppy gets to spend lots of time out of cages and with people.

Finally, another big factor is what you do with the puppy after you buy it.  If the puppy is placed in the wrong kind of situation...  you can ruin the temperament of even the best puppy.  For example, even the best bred Cocker Spaniel puppy is going to have some major personality problems if you leave him/her alone all day every day while you go off to work.  Cockers are very people-oriented, and just go crazy if left alone most of the time.  They bark, they chew everything in sight, and they're so glad to see people at the end of the day that they get themselves worked up in to a total tizzy!  I'm sure this has a lot to do with why some Cockers are so darned hyper.  Another good way to ruin the temperament of a nice Cocker puppy is to put that pup with a 2 year old kid.  That's just a really bad age to have a dog in the family.  I don't sell puppies to anyone with kids younger than six years old.  Most young kids just do not have the maturity to treat a dog properly.  It may start out very nicely, but it's just a matter of time before the kid hits the dog, pulls his/her ears, tries to wrestle or otherwise just plays too rough.  I really can't advise getting a Cocker puppy until your youngest child is a few years older.

I've had two Cockers in the past, and both had some significant health problems.  I want to get another Cocker puppy, but I want to make sure he comes from a healthy background.  Any suggestions?

I think it definitely is possible to get a good quality and healthy Cocker these days…  you just have to be careful about a few things.  First off, and this probably goes without saying, you can't get one at a pet store…  almost all those pups come from puppy mills, and it would be hard to find a much worse source for a puppy.  You definitely have to deal direct with breeders, and spend some time asking them some questions to figure out if they are just cranking out puppies for the money or if they are truly putting an effort in to breeding high quality dogs.

The first thing to ask about is health testing on both parents.  The good breeders will do OFA testing of the hips and CERF testing of the eyes of both parents to screen for genetic health problems.  Just asking breeders if they do OFA and CERF testing is a great litmus test for breeders…  if they say they don't do OFA and CERF tests (or if they don't even know what you are talking about) you know not to waste much more time with them and to move on to a different breeder.  Generally, the breeders that go to the trouble and expense of doing OFA and CERF tests are also doing a whole host of other things right.  They truly "get it" when it comes to breeding healthy puppies.

The other important thing to check on is the pedigree of each of the parents.  It is unfortunate that some breeders (most often breeders in the show world) have bought in to this crazy idea called "linebreeding"…  where you breed dogs that share a common relative, usually a successful show dog, in hopes of getting puppies with characteristics similar to the common relative.  I think it's a great way to make puppies that look like a champion show dog, but I think it's a terrible idea if you are trying to make dogs that will be healthy for 14 or 15 years.  In my opinion, genetic diversity is the way to go…   breeding completely unrelated dogs.  So, I recommend that you look at the pedigrees of the parents of any pup you are considering adopting…  and making sure that there aren't any names that appear on both pedigrees.

I think if you follow that advice, you will be way far ahead of the game and you will have vastly improved your odds of getting a dog that will live a long healthy life.