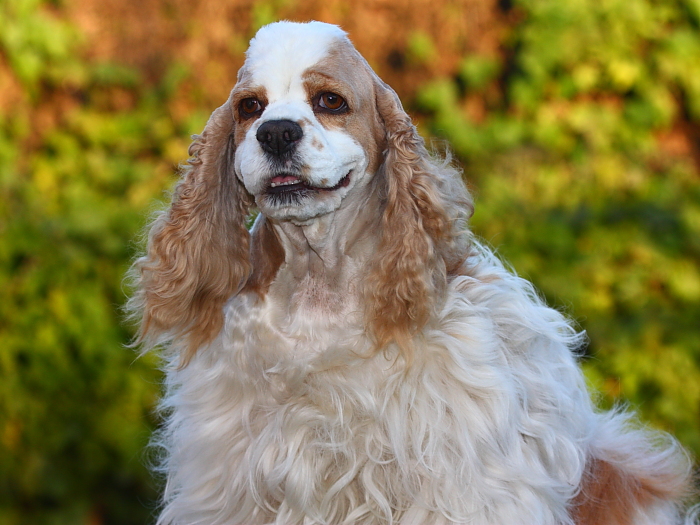 Joanna has made a huge contribution to our breeding program...  giving us three great litters of pups, so far.  She had a litter in 2006 with Vicki Wallace's sable parti boy, Merlin...  a litter in 2007 with our red & white boy, Dodger...  and in 2008 had another litter with Merlin, but this one was even more spectacular than the first!  She is the mother to fourteen puppies, including the only chocolate tri colored pup we've ever had in one of our litters, as well as the only two sable partis we've ever had.  The plan is for her to have one final litter (in the summer of 2010)...  and after that, she'll be retired.  She's been a fantastic devoted mother to those three previous litters, and she actually seems to love having puppies.  It's actually kind of sad that after this year she won't get to experience the whole motherhood mode that she seems to enjoy so much.

When she isn't watching over a litter of puppies, Joanna is one of those Cockers that seems to really love being around people.  She wants to be right there with us at all times and never wants us out of her sight.  While some Cockers want nothing more than to play ball or to go for walks...  Joanna is more interested in sitting at our feet, or better yet, right on our lap.  When we have visitors, it can be a bit of a shock if I forget to warn them about Joanna's love for sitting in laps!  When our visitor is least expecting it, Joanna has a tendency to just jump up on their lap.

Joanna came to us in May of 2003 from LaWanda Miskovsky of Wannie's Cockers in Flagstaff, Arizona...  the same breeder that provided us with Reese.  We owe a big "thank you" to our friend, Jacqui Christy of Hi Acre Cockers in San Diego county, for introducing us to LaWanda in 2003 when we were looking for a new female puppy.  Jacqui used to be the Secretary of the Cocker Spaniel Club of San Diego County.  She told us about the new puppy she was getting from Arizona, and she suggested we contact the breeder to see about other pups that might be available in the litter. 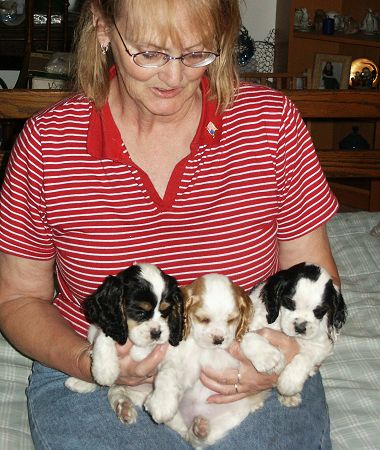 Jacqui Christy, holding Joanna and two of her sisters.

Joanna turned two years old in early 2005, and that's the age that good breeders will do health testing to screen dogs for genetic defects prior to breeding.  She has a "good" rating by the Orthopedic Foundation For Animals, and has passed eye examinations by a Veterinary Ophthalmologist every year since 2005. 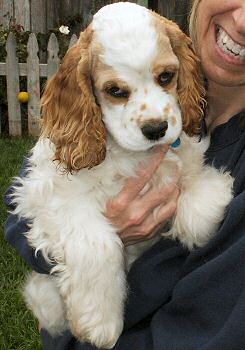 Mrs. Zim and I spent hours trying to come up with a good name for Joanna when she first joined our family, and we finally agreed on the name Joanna after I mentioned the 80's pop song of the same name by "Kool and the Gang".  The lyrics to the song go something to the effect of "Joanna, I love you.  You're the one...  the one for me!"

Joanna's registered name just kind of rolls right off the tongue...  it's Wannie's Joanna Roseannadanna.  Wannie, of course, refers to the kennel name of her breeder in Arizona.  And if you're old enough to remember the original cast of Saturday Night Live, you probably remember Roseanne Roseannadanna...  the character played by the late Gilda Radner.

Luckily Joanna has better hair than Roseanne Roseannadanna did! 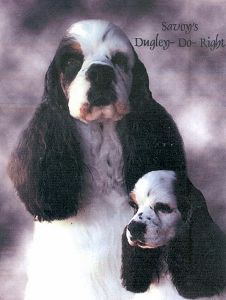 Joanna's father is a champion show dog with a long line of champions behind him.  His registered name is Champion Savoy's Dugley Do-Right, and his call name is Paisley.

Because Joanna is a red & white with a black & white father and a chocolate & white mother...  she carries the genes for black, red, and chocolate.  That's somewhat unusual, and it makes Joanna the only one of our dogs capable of creating puppies in all three of the major parti colors:  black & white, chocolate & white, and red & white...  and in her third litter she also proved that she can make sable & white puppies!

You can learn a lot more about her background by viewing Joanna's pedigree.

Here are some of the best pictures I've taken of Joanna: 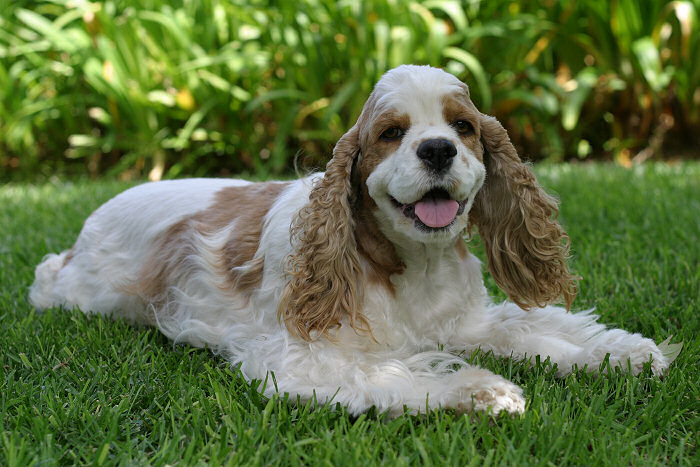 An August 2006 picture of Joanna 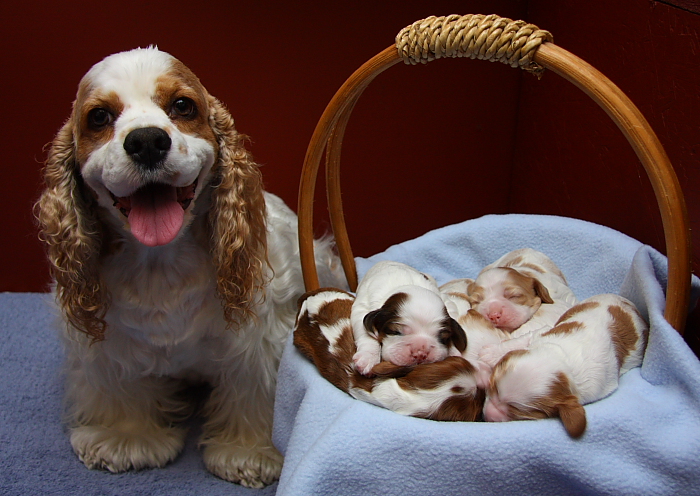 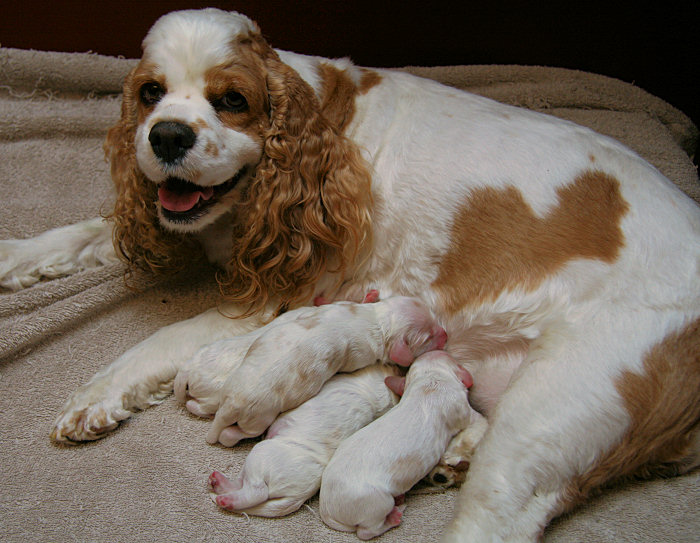 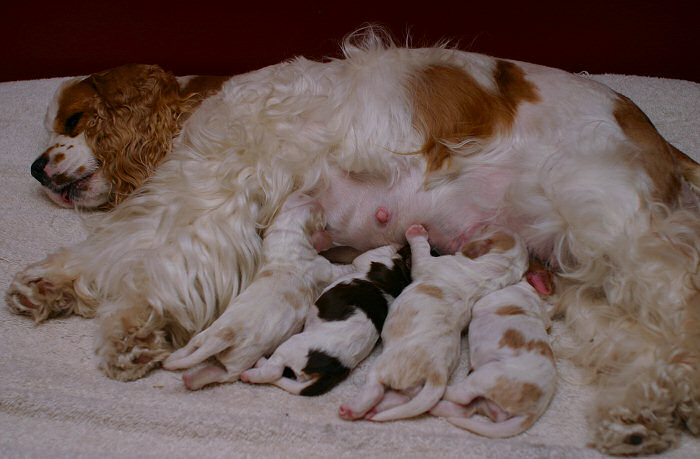 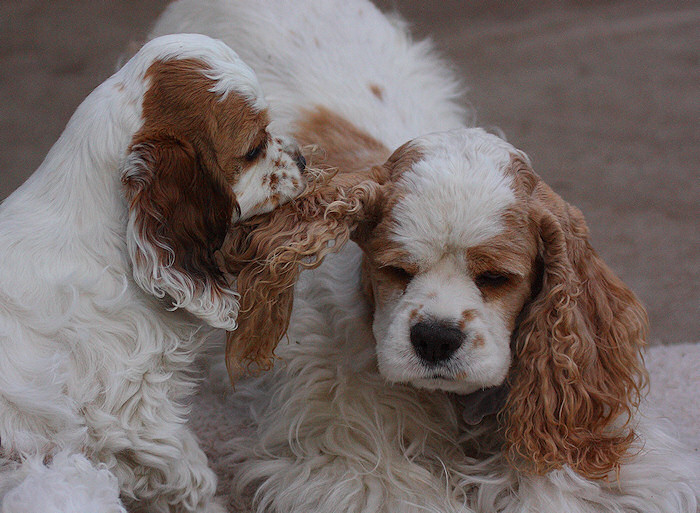 Joanna is very tolerant of the typical antics of a litter of puppies.
People who have followed our litters over the years know Joanna as "the best mom" in our pack. 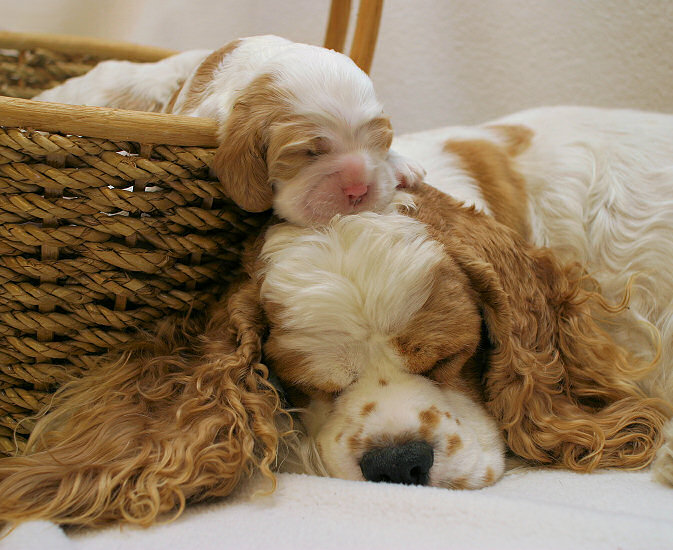 Joanna with one of the pups from her first litter 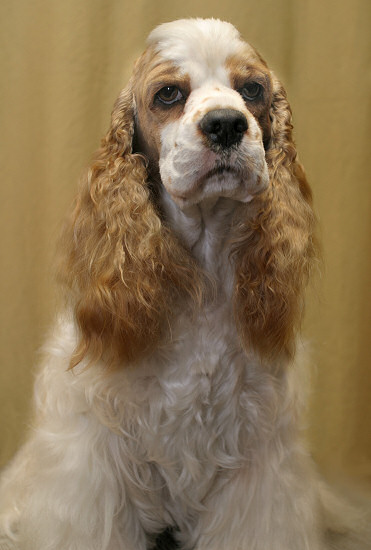 A January 2006 photo of Joanna 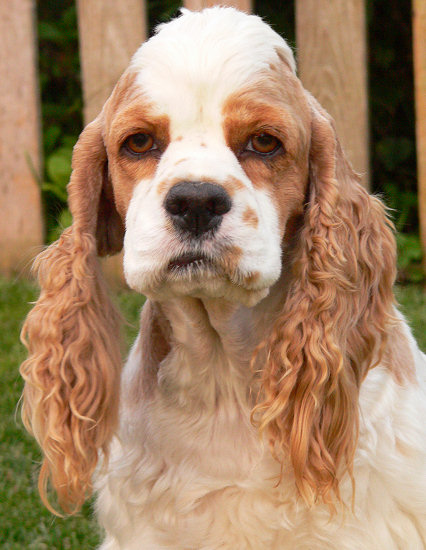 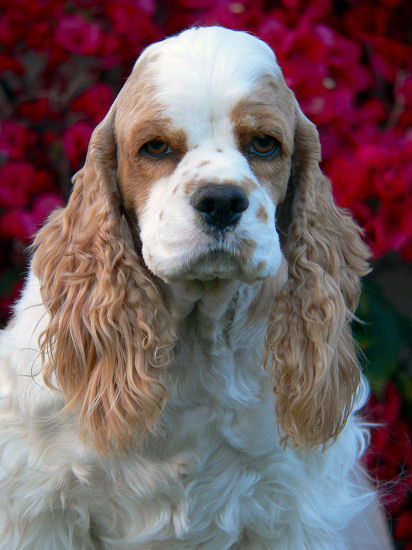 An April 2005 picture of Joanna 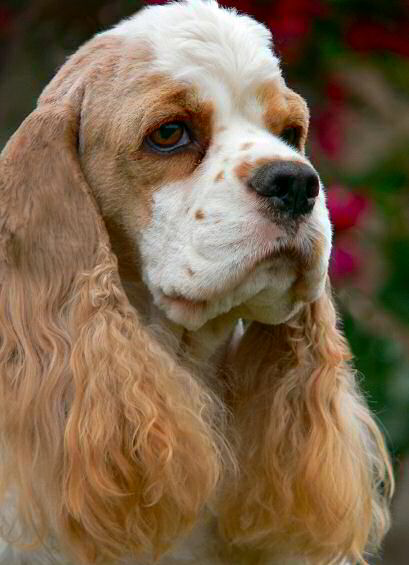 A September 2004 picture of Joanna

Joanna at one year old 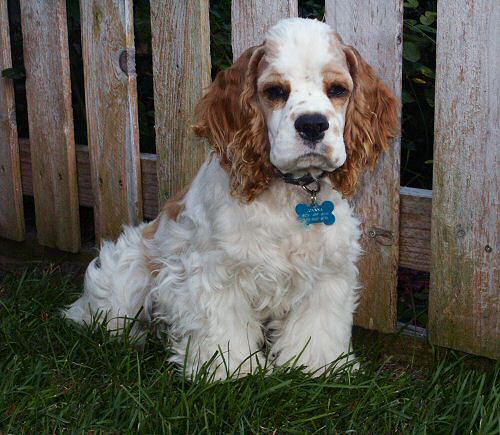 Joanna at five months old
click here for a larger version of this photo,
suitable for use as your Windows desktop background 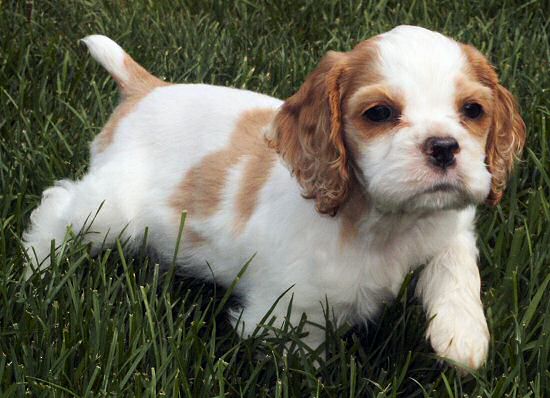 Look at the confidence in that body language! 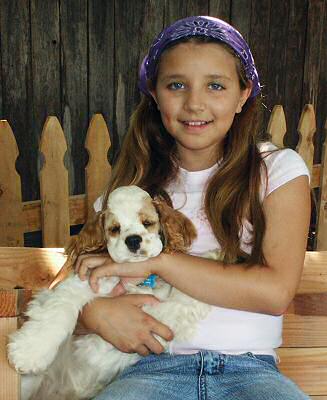 Joanna at four months old, with a friend of our family 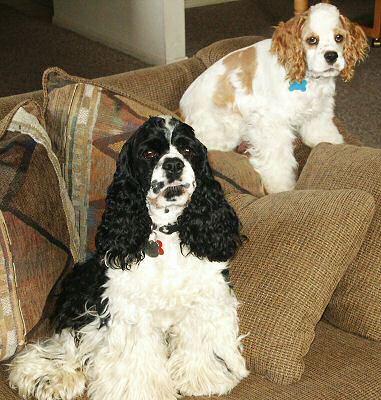 An August 2003 picture of Joanna with her pal, Morgan 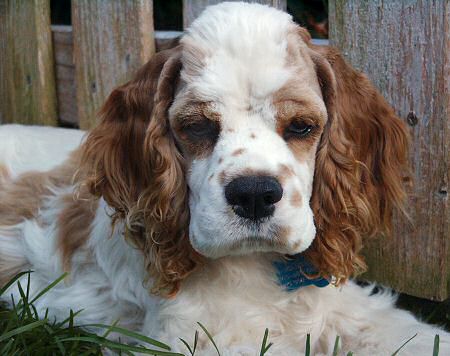 Joanna at five months of age 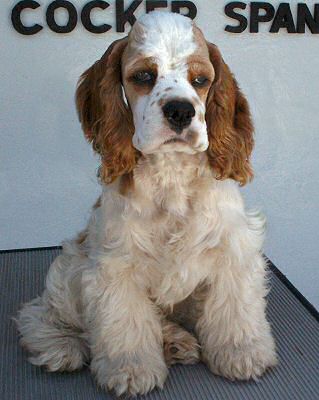 Another shot at five months 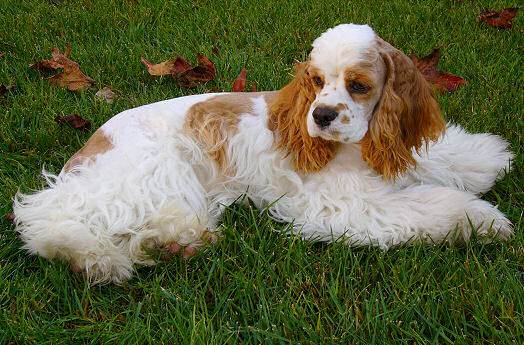 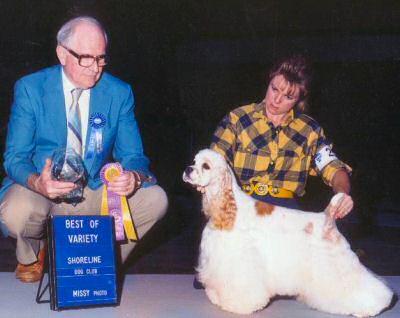 Lois wrote to tell me that she enjoyed my perspective of the big national specialty Cocker show in Riverside in July.  (See the photos I took there, and read my comments here.)  I wrote back to tell her how delighted I was to hear from her, since she is the breeder of Joanna's grandfather, Champion Glenmurray's Declaration.  I asked her for an update on him, and she sent me this picture of him in his prime.  By the way, the woman in the photo is Julie Virosteck, who has gone on to become one of the Directors of the American Spaniel Club.

Unfortunately, Lois informed me that Teddy had to be put to sleep a few years ago.  He was 12 years old.  It was very sad news, indeed.  But a little bit of the ol' boy lives on right here in our house, and he sure did pass along some great genes.